Posted on September 1, 2017 by webmasterchuck

Thanks to Charlie Lanphear for providing the link to this interesting article about an icon in one of our neighborhoods.

An ode to the Village Bar 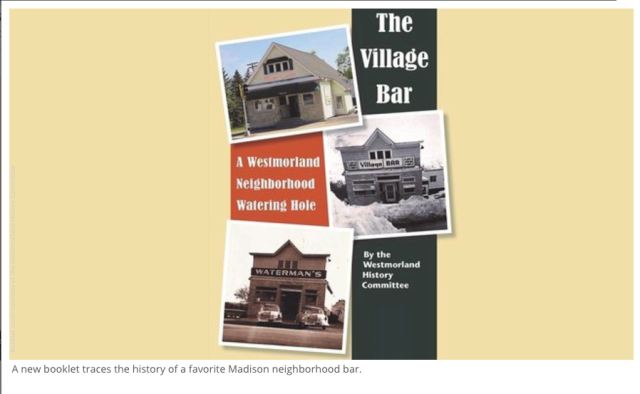 “It is always risky to lay a claim to being the “first” this, or the “oldest” or “longest-running” that.

I’ve played golf on several courses that were the oldest in Wisconsin, if you believed the scorecard or the bartender at the 19th hole.

I will refrain from laying any such claim for Madison’s Village Bar, other than to say it has both a great history and a great cheeseburger. The building dates back more than a century, though it wasn’t always at its current 3801 Mineral Point Road location.

Now the rich legacy of the Village—or the Villagio, as John Roach likes to call it—has been captured in a new, modest but fascinating booklet titled “The Village Bar: A Westmorland Neighborhood Watering Hole.”

In the booklet—for sale at the Village—you’ll read about a well-known Madison restaurateur who owned the Village prior to opening his legendary supper club; you’ll learn the story of how leaving the cheese off a cheeseburger led to a marriage proposal (mine); and you’ll discover how the celebrated comedian Jerry Seinfeld found his way to a Village burger.

The booklet was put together by the Westmorland History Committee, with Tom Martinelli on point. Martinelli was also involved in the publication of a Westmorland neighborhood history in 2011, and, most recently, he coauthored a book on Edgewood High School football.

The Village Bar, as noted, did not begin existence in Westmorland, or rather the building didn’t. Instead it was a single-family home, built circa 1915, near the University of Wisconsin–Madison campus. It was purchased by Cross Plains native Theodore Herling and moved by a team of horses to the current Village location, where it opened first as a general store.

The family installed a bar at the end of Prohibition, and by 1941 it was solely a tavern, called Herling’s Bar.

It was Waterman’s Bar after Bob Waterman bought it, and then, in 1953, the Village Bar got its enduring name when it was purchased by brothers-in-law Frank Vitale and Joe Namio.

Namio became much better known for the eponymous supper club he ran for 34 years on Park Street starting in 1960. Former Gov. Tommy Thompson told me recently that when he was on the Joint Finance Committee as a legislator in the 1960s, they hammered out the state budget in a back room at Namio’s.

Vitale continued to operate the Village until 1978, when Leo and Jan Castle, who’d owned Bob and Gene’s Tavern downtown, purchased it.

The thing about the Village is, it’s never really mattered who owned it, because little about it changes. It’s the kind of burger and beer place where tables get pushed together for softball teams and everyone—the Village is inclusive—feels comfortable cheering for the Badgers and complaining about the government.

Regulars can be forgiven for forgetting just who does own the Village. Current owner Mark Kampa bartended for the Castles before buying the Village in 1999, and after the purchase Leo Castle often continued working behind the bar.

Kampa was there on the day in 2005 when Jerry Seinfeld, in town for an Overture performance, got in a limo and asked the driver to take him to a good cheeseburger. They went to the Village. Seinfeld signed a menu.

And me? Well, I go back half a century with the Village, which may be one reason the Westmorland folks asked me to write a foreword for the new booklet.

As a kid I would ride my bike to Glenway Golf Course on weekend mornings and then meet my older sister—who bought her first house on Westmorland Boulevard—for lunch across the street at the Village.

Decades later, I was living on Gregory Street with the future Mrs. Moe, hopeful but not certain that she had interest in becoming Mrs. Moe.

We’d made the short walk to the Village for dinner. I paid for our cheeseburgers and fries but when they arrived at the table, the cheese was missing from the burger. I thought to myself, “How can I turn this around?”

At which point I said I was hoping I might start calling her Mrs. Moe.

“That would mean we would have to get married,” Jeanan said.

These years later, the Village Bar has its own booklet, we still love the burgers, and Mrs. Moe is always happy to explain things to me.

Doug Moe is a Madison writer. Read his monthly column, Person of Interest, in Madison Magazine.”

This entry was posted in General Interest, Madison Related. Bookmark the permalink.