I wanted to share this email and photo from Chuck Lanphear that I received this week.  He relates to a recent visit from classmate Stu Gordon:

“Stu and his much younger brother Bob passed through Prescott Valley, Az. on their BMW motorcycles last week, we had an early dinner at a local Mexican rest., they left early the following morning, I find great humor in Stu’s story of his trek back home to Calif. He is definitely way to old to be having so much fun. Charlie”

“Yes I made it home but it was an adventure. Jon was not in Wickenburg so we moved on to Yuma to visit Bob’s friend. I decided to head on back to San Diego that evening so about 3:30, I  headed west of I-8. There was about a 30-40 mph cross wind out of the southwest which created a sandstorm and sandblasting on my way to the costal range east of San Diego. When I started up the grade on the range, rain was added to the elements and then as I got about the 3000 ft level, fog was added. At about the 4000 ft level, the temperature dropped to 41 degrees (and after riding in 90+ deg temp, I wasn’t dressed for the low temperature). By the time I got to El Cajon, the wind had diminished, the roads were dry and the temp was about 60 deg., but I was @#*&@ cold to the bone. All part of the adventure of motorcycle riding! See attached picture. We enjoyed the visit and dinner, thanks.  Stu” 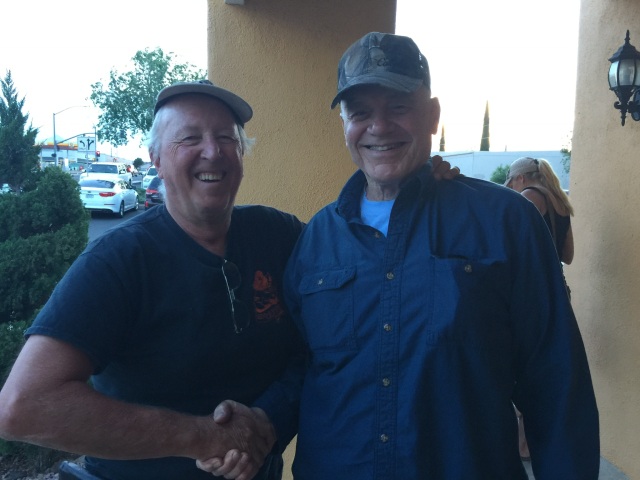 This entry was posted in Classmate News, Classmate Related. Bookmark the permalink.

1 Response to Chuck Lanphear checks in