Posted on February 18, 2004 by webmasterchuck 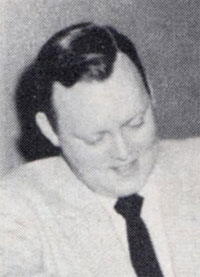 After graduating from West High School in 1941, Parnell served as a pilot in the air transport command during World War II. After returning to Madison, he attended the University of Wisconsin, where he obtained a master’s degree in art education. Parnell taught art at West High School until his retirement. His artwork depicted primarily disappearing rural farm scenes and natural habitats of Wisconsin. He enjoyed fishing up north in Manitowish Waters and the Rice Creek area with his sons and grandson. Parnell made everyone feel as though they were his friend. He was a very proud man and a true gentleman – the best husband a woman could ever want. Parnell and Betty were looking forward to their 60th wedding anniversary this summer. Parnell is survived by his wife, Betty Jane; his sons, Gregory (Joan) and Gary; daughter-in-law, Mary Lou Bach; his good friend, Lee Bjornstad; his grandsons, Alexander Bach and Jason Bach; and many nieces, nephews, grandnieces and grandnephews. He was preceded in death by his parents and his brother, John Bach. Parnell’s family would like to thank Bob Weber for his friendship and support. Parnell’s wish was that there be no services. In lieu of flowers, the family suggests donations be made to the West High School Art Department, 30 Ash St. Madison, WI 53726. “And if God wills, shall but love thee better after death.” – Robert Browning
Cress Funeral Service 3610 Speedway Road (608) 238-3434 http://www.cressfuneralservice.com

This entry was posted in Former Faculty Obituary Notices. Bookmark the permalink.