Posted on October 28, 2019 by webmasterchuck

I received the following note from JoAnn/Phyllis passingf on the sad news about Jack Lucas.

Hi JoAnn/Phyllis-Thanks for including Jack Lucas in on this invite. Unfortunately, we are sorry to inform you that Jack passed away on Wednesday, October 23rd, 2019. I’ve attached a copy of his obituary, which you may pass along to other classmates of Jack. This obituary appeared in the Antigo Daily Journal on Saturday, October 26th, 2019. 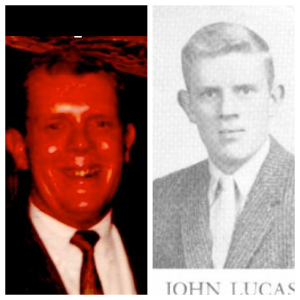 Jack was born on December 6th, 1939 in Madison, Wisconsin, to Warren and Jean (Newlin) Lucas.  He graduated in the class of 1958 from Madison West High School.  He attended the University of Arizona and the University of Wisconsin, where he was a member of Psi Upsilon fraternity.  Jack married the love of his life, Eleanor (Ellie) Shipman, on February 27th, 1965 in Milwaukee.  They had one daughter, Katherine Anne (Kal).

Often referred to as ‘fun-loving Ned’ by his immediate family, Jack was a born salesman, speaker, US History buff, patriot and true people-person.  He spent many years representing the Mautz Paint Company in various locations around Wisconsin.  His salesmanship earned him numerous awards, as well as other job opportunities that took him and Ellie to Washington DC, Philadelphia, PA, Lansing, MI, Winston-Salem, NC, and ultimately back to good ol’ Wisconsin.  There wasn’t a segment of the state that Jack did not know, and he had countless customers and friends throughout the region.  After retirement, Jack worked part-time taking surveys for the National Association of State Departments of Agriculture (NASDA) and he thoroughly enjoyed working with local farmers.

An avid Wisconsin Badgers and Green Bay Packers fan, Jack was also known to be a die-hard Chicago Cubs fan.  He said that his life was complete when the ‘Cubbies’ finally won the 2016 World Series after 108 years of futility.  Jack’s life was full of never-ending jokes and he could be quite the prankster.  Along with his jovial approach to life, Jack had a heart of gold, and he had the ability to evoke tears with his history stories of bravery and heroism.

It was Jack’s wish that no funeral be held, but a ‘Celebration of Life’ for the family will be held at a later date.

We sincerely wish to thank the staff at LeRoyer Hospice.  They were so helpful and supportive of Jack, Ellie and family.  In lieu of flowers, feel free to donate to this wonderful organization in Jack’s honor.

Posted on September 7, 2019 by webmasterchuck

The following classmate biographies have been added:

Click on the above names to view the page where the bio appears.

The following classmate bio has been added:

The following bio has been updated:

Biographies for the following classmates have been added recently:

Click on the individual name to view the specific bio.

Phyllis and the “Bio Team” are plugging away at the classmate biography project.

Ron Haessig and Steve Hunter bio’s have been added.

Click here to visit the page containing these recent additions.

Posted on August 7, 2019 by webmasterchuck

Biographies have been added today for the following classmates:

Click here to go the page containing these biographies.

The biography for classmate Louise Nuesse Cadwgan has been added to the Biography Page.

Click here to visit the page containing her bio.